A tunnel in mid-air

Immerse yourself in the history of Reunion Island’s first volcano "

Sébastien takes us to discover one of the island’s biggest lava tunnels, born from an eruption of the Piton des Neiges tens of thousands of years ago.

With our gloves, knee pads, helmets, head-lamp and harnesses, we’re ready to set off into the tube. First surprise: we don’t go down into the tunnel ... instead, we climb up it! Thanks to the "via cordata" (ropeway) installed by Sébastien, we make our way one by one up to the tunnel entrance, located 6 metres up.

On with the head-lamps, and we’re off into the cramped tunnel. The roof is quite low for the first few metres, but very quickly, we find ourselves in huge galleries. We get used to the silence and darkness as we follow the footsteps and voice of Sébastien.


In search of the treasure of La Buse

It’s the moment we’ve all been waiting for. We make our way down the tunnel, a narrow passage of about fifteen metres, which has to be negotiated on all fours. A shiver runs through us, cooler air rises up from the tube ... but the apprehension must be there for a reason! As the walls close in, it feels as if we’re entering the embrace of this mineral world, and our sensations increase tenfold. The volcanic rock cracks under our gloves and knee pads as we creep along, sometimes almost flat on our stomach.

At the other end of the tunnel, we quickly discover large open spaces, such as the "breakfast room". We admire the lava benches, ochre walls and clay deposits. What’s special about this tunnel are the calcite stalactites and magnesite concretions. In places, the lava tunnel is white, as if covered with coarse salt!

On these walls, we can see old inscriptions which indicates that the cave was known to the first navigators who stopped over on the island. Later, I’m sure that lots of people came here, hoping to find the treasure of La Buse." While we might not find a chest of gold coins, the tunnel seems, in places, to be covered with precious stones or gold leaf. That’s enough to make your eyes light up in itself.

Tea in the dark
Having reached the lava "plug", which brings progress to a halt, Sébastien has a nice surprise for us: spiced tea for us to enjoy in the darkness, to the background noise of runoff water on the clay walls.

It's time to head back for the exit, where there’s a zip line waiting to provide a final rush of adrenaline. We descend the 30 metres that separate us from the banks of Bassin Bleu, a smile "like a papaya slice" on our lips.
Discover an unusual lava tunnel, a few kilometres from the lagoon
A sports outing accessible to all, to test your climbing, zip line and pot-holing abilities
A timeless experience which brings all your senses to life 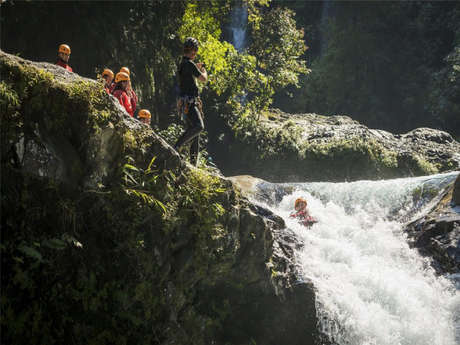 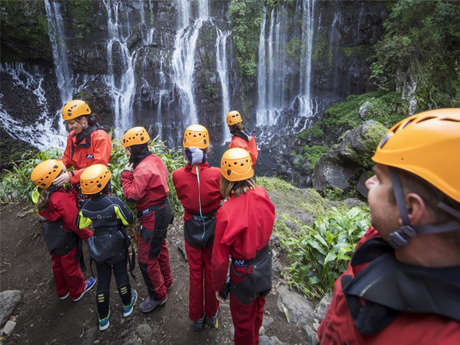 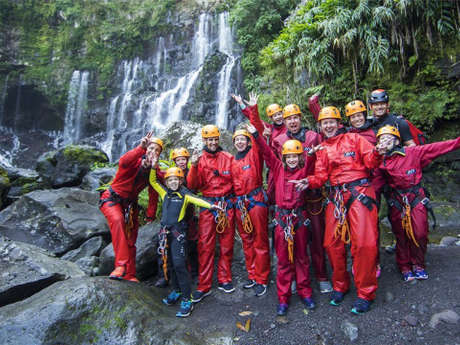 Reviews
Ask a question
From
50 €
Booking