Home / Experiences / The real bourbon vanilla
-A +A
Back to list

The queen of flavours

The authentic flavour of Bourbon vanilla has no equal. It is renowned the world over"

In Sainte-Rose, Maryse's vanilla creepers grow in the luxuriant undergrowth. I spent two interesting hours learning all about vanilla farming and discovering the wealth of riches in the Reunion primary forest.

It's above the small town of Sainte-Rose that Maryse created her vanilla plantation just over ten years ago: Vanilla Bourbon. She welcomes us today with Vincent, the plantation's official guide. Their passion is infectious!

First of all I learn that vanilla is actually an orchid, originally from Mexico, and that there are two main ways to grow it: in the shade, or in the undergrowth, as here, with trees used to support the long creeper which are wound around to keep the pods within hand's reach.

While walking, Maryse and Vincent tell us about the history of this tropical plant which has become a speciality of Reunion Island: it was a young slave from Sainte-Suzanne, Edmond Albius, who developed the process of artificial pollination for vanilla, in 1841. Using a small toothpick, Maryse shows us how this is done by bringing the male and female organs of the same flower together. The flower will soon produce a green pod that will be harvested when ripe.

Maryse has brought a few sticks of Bourbon vanilla with her: long, shiny and a beautiful black colour, the pods from Reunion Island are considered to be the best in the world.

On the slopes of the volcano

The forest which is home to Vanilla Bourbon has grown on a lava flow from 1708, and it would appear that the vanilla loves to plunge its roots into this volcanic soil. Vincent explains how rich this teeming ecosystem is where mosses and ferns grow alongside the orchids. A little further on we discover papaya trees, coffee plants, kaffir lime plants. Everything seems to grow here!

Throughout our tour, we are followed by Léo and Léa, two stonechats or "tec-tec", endemic birds to Reunion and far from timid: they always follow Maryse whenever she's on the plantation. Vanilla Bourbon has recently been awarded the "Esprit Parc National" label, which distinguishes products associated with La Réunion National Park. Their passion has been rewarded!
Growing vanilla in a natural environment
Discover the flora and fauna of Reunion Island
Friendliness 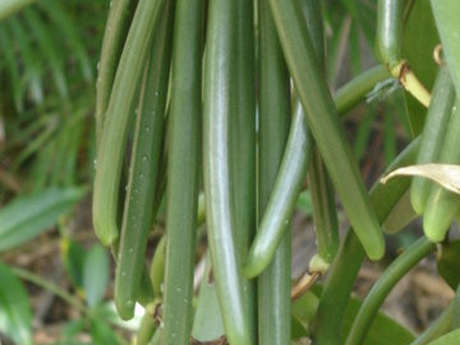 Reviews
Ask a question
From
9 €